With the recent release of Windows 10, Microsoft has replaced the old Internet Explorer with their new browser, Edge. Using Microsoft’s Metro design style, Edge offers a very sleek and minimalist user interface. The browser also offers a number of new features not previously seen in Internet Explorer. However, is Edge the big upgrade we’ve all been waiting for, or yet another new browser full of bloated gimmicks?

The first of the new features is the integration of the new Windows 10 feature “Cortana”, which integrates with Edge to offer new ways to interact with websites. Cortana is described as being an “intelligent personal assistant”. For those who are familiar with Apple’s Siri, it serves a similar purpose and function. While voice controlled searches are nothing new, Cortana also integrates with Edge to allow users to highlight and search for terms contained in the articles they are reading. Highlighting and right-clicking on one or more words and clicking on the “Ask Cortana” option will open a panel on the right side of the window, containing either search results for a term or dictionary and Wikipedia entries depending on the terms being searched for. Clicking on a search result will open the page in a new tab, removing the need to manually open new tabs and enter search terms.

Chrome offers similar functionality, instead opening a new tab and showing Google search results for the highlighted terms. Cortana differs in that it shows contextual search results, offering dictionary and Wikipedia based results for more generic searches such as simple words, while providing complete search results from Bing, based on more complex search terms.

One consideration users will have to make regarding the use of Cortana is that it uses Bing as its search engine. While Edge allows users to switch the default landing page and search engine to the user’s preference, Cortana is currently tied to Bing. Users have reported been able to get around this while using voice input by explicitly asking Cortana to search using a particular search engine, but unfortunately this doesn’t apply to the aforementioned highlight and search functionality. Edge also doesn’t support plugins currently, but there’s a chance that with future updates, the ability to change the default search engine might be added.

The lack of plugin functionality is one of the major drawbacks that will keep users away from Edge, at least until Microsoft delivers on its promise of plugin functionality being added in a future update. This seems to be an issue partly due to the inability of users being able to install such widely used add-ons such as AdBlock. For users of Firefox and Chrome, the use of AdBlock is fairly commonplace to cut down on the clutter that many popular websites contain.

So is Edge worth switching to? Browsers ultimately bottle down to user preference and what can accommodate their needs, and Edge is a much needed upgrade to the old Internet Explorer.  We think it’s worth giving it a trial – we’ve only just scratched the surface of what Edge has to offer, which we’ll continue to explore in the next issue of Ignite. 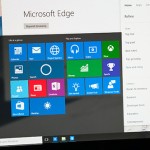